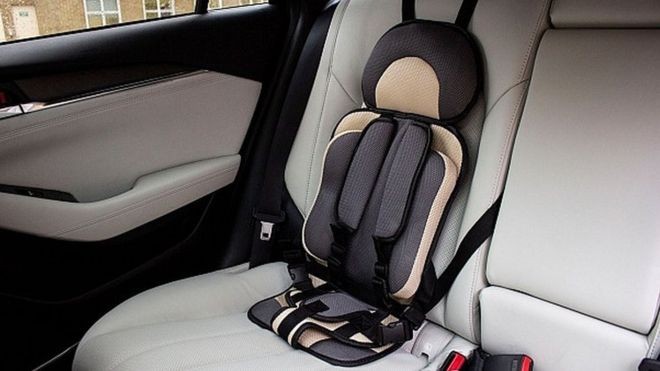 Children's car seats, dubbed "killers" by trading standards officers, have repeatedly appeared for sale on online marketplaces, Which? has warned.

The consumer group said the fabric seats, which can cost as little as £8, offered almost no protection in a crash and were illegal to use in the UK.

The online sites - Amazon, eBay and AliExpress - all said they had removed the seats from sale.

But Which? said the listings should have been deleted quicker.

Which? said the seats had been described online as suitable for children from newborns up to the age of five.

However, in 2014, Surrey Trading Standards had conducted tests on a fabric seat which fell to pieces in a 30 mph accident. The crash test dummy of a three-year-old child was flung through the windscreen when the straps securing the seat failed.

Trading standards officers dubbed them "killer car seats" and removed dozens of them from sale. Which? said they lacked the support needed to protect babies and toddlers.

However, the consumer group said that they had repeatedly re-appeared for sale on online marketplaces ever since.

Alex Neill, from Which?, said: "Parents will be horrified at the thought they could be unwittingly putting their child's life at risk with one of these 'killer' car seats. Online marketplaces cannot continue to turn a blind eye to dangerous and illegal products being sold on their sites."

Regulations state that only EU-approved child car seats can be used in the UK.

Approved seats carry a clear orange label with the codes ECE R44-03, ECE R44-04 or ECE R129 to indicate they have been put through EU safety testing and can therefore be legally sold on the UK market.

Consumer groups suggest car seats should never be bought secondhand, as they could have been involved in an accident but damage to the seat may be unclear.

Sales site eBay told Which? That it had asked the sellers involved to contact the buyers to organise a return, and to pay for the return shipping.

"Our specialist teams work with regulators and Trading Standards to ensure our block filters stay up to date, using sophisticated software that monitors billions of listings a day to remove any prohibited items," an eBay spokesman said.

Amazon said "All sellers must follow our selling guidelines and those who don't will be subject to action including potential removal of their account. The products in question are no longer available."

AliExpress said: "After we were told by Which? about these third-party listings, we took prompt action to remove them. We will continue to take action against sellers who violate our terms of use."

By accepting you will be accessing a service provided by a third-party external to https://www.goodeggcarsafety.com/